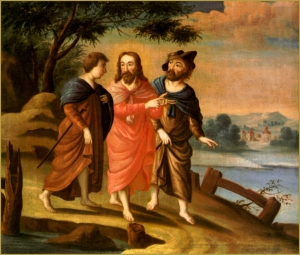 About a month and a half ago I was driving to Mass. It was a Saturday evening.  We typically don’t go to church on Saturday, we prefer going on Sunday, but this particular Mass would be to celebrate the graduating seniors in our parish. I wanted to be there to honor their accomplishments and to tell them how proud I was of them. As a youth leader in our church it was important to me to be there for them.

We turned on the road that leads to the church and about a quarter of a mile up the road I saw a man walking. He tried to flag down the car ahead of me but they didn’t stop. He flagged me down. I stopped, looking behind me to make sure no other cars were there, and rolled down my window.

“You going to that Catholic Church up the road?” he inquired.

“Yes, Sir, I am. Is there something you need?” I responded.

“Well, I need a ride to I-20. I stopped at that Catholic Church and no one will give me a ride. The pastor was nice, but he won’t either.”

“Well, I would give you a ride if Mass wasn’t going to start in about 10 minutes. But if you’d like to wait until after Mass is over I would be happy to take you there. In fact, you can come to church with me if you’d like.” I replied to him, smiling.

“No, I want to go now. Why don’t you just take me there now?” he asked persistently.

“Well, I-20 is in the opposite direction and Mass starts in about 10 minutes. There is no way I can take you and make it back to Mass and I need to go to church.  I would be happy to take you there after Mass. You can wait for me or you can go to church with me, either is fine. But I really need to make it to Mass.” I said, looking in my rearview mirror to check for other cars. I saw a few were starting to line up behind me.

“You know, those people wouldn’t take me either!” he said with his voice rising in anger.  He muttered a couple of swear words and glared at me.

“Sir, I would be happy to take you but I just need to wait until after Mass.” I said in response.

“No, I don’t, but I will give you what I have.” I said as I reached for my wallet. I pulled out the three dollars I had to my name and folded them over. I handed it out the window. He approached my car and took the money out of my hands.

He looked down at the money and seeing it was not $10 gave me a look of disgust. “This is all?”

“Sir, that is all I have. Like you, I don’t have much either. That truly is all I have.” I replied feeling embarrassed and starting to feel a little angry too.

He looked me up and down and said, “You know, I could be Jesus and those people just wouldn’t help me.  Aren’t you supposed to assume I am Jesus in disguise and help me?”

Becoming irritated at his lack of respect for me and for others, his attitude of self-entitlement, his gross misuse of Christian teaching, and his lack of humility I said in reply, “Sir, I highly doubt that you are Jesus.”

He looked at me confused and asked why I would say such a thing.

I replied to him, “Sir, I have offered you a ride; you refused it, saying I need to skip church to take you.  I offered you what little money I have; you looked down on it because it wasn’t as much as you wanted, even though it was all I had. You have belittled those who perhaps have their own reasons for not being able to help you and you refuse to go to Church to celebrate the Lord. You have misused Christian teaching to benefit yourself. I have a very hard time believing that you are Jesus in disguise. You need to ask yourself if Jesus would behave that way.”

As he looked at me, his face softened, perhaps a feeling a tad embarrassed himself said, “Thank you for your help. I will start walking and when you are done with church if you see me you can give me that ride.” And he started walking away.

I looked in my mirror and I saw a string of cars behind me. None had honked and none had indicated that they were upset I was keeping them from the church. I began to drive and my daughter said, “What in the world just happened?” I shrugged my shoulders and told her I didn’t know.  We decided to pray for him at Mass.

After Mass when I was driving home I never saw the man. The kids asked me if I was going to give him a ride if I saw him. I told them yes, I was. But we never had that opportunity. Maybe someone else gave him the ride. Maybe he made it to where he needed to go. Maybe he really was Jesus in disguise. I don’t know. The kids and I had a discussion about true giving, about humility, and about thankfulness. While I don’t believe the man was Jesus in disguise I do believe we encountered him both for our benefit and for his too. I pray I gave him a few things to think about just as he did for us.

Over the last month and a half I have wondered about that man.  What was his story? How did he get to where he was in life? Where was he going? He wasn’t tattered and dirty. He didn’t look like he had been walking long. He was well-dressed and he was well-spoken. Was he mad because he had felt looked down upon by others? It didn’t seem that way, although I suppose that could have been the case. No, it seemed to me that his anger at people not dropping what they were doing to bend to his needs was more indicative of our society today. We live in a “me-centered” world. We want what we want and we want it now! We are told that what we want should come before everyone or everything else. “Do what makes you happy!” “Go for it!” “Just do it!” Unfortunately when we think and act this way we lose sight of something very important… this life isn’t just about us and our needs or wants.

As Christians we are encouraged to see Christ in everyone, even those who don’t act like Christ. Sometimes that is hard. We are often so caught up in looking at the outside of a person- his appearance, his attitude, his words- that we fail to look inside of him. We fail to see how he has been influenced over the years by the things that have happened in his life… things that sometimes harden a soul. If we are to believe that all people are created in the image and likeness of God doesn’t it make sense that sometimes we might have to dig through the outer layer to find God buried deep within?

As we fall further into the abyss of the “me society” we fall away from what truly matters. We are not put on this earth to put our own wants first and to try to get ahead, no, we are here to help others and to glorify God with our thoughts, words and actions. We must look for Christ in everyone we meet but we must also be Christ to everyone we meet as well.  We have to strip away our selfishness and encourage others to do the same. It is the only way to truly meet Christ along the road we travel.