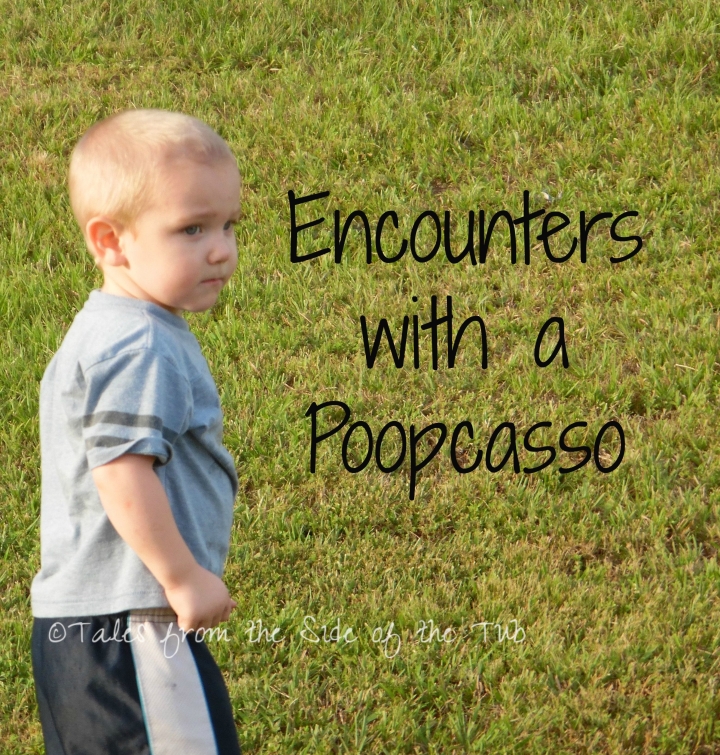 Ah, every mother’s nightmare- a child is alone, in his bedroom, and is very, very quiet. Someone goes to check up on him and begins to scream. “Mama! Mama! You need to come here quick!

You hang your head in despair because you know this will not be good.

When you get to the bedroom you find it’s worse than you thought. There is poop everywhere. EVERYWHERE. Seriously, everywhere.  The walls, the doors, a bed, a book, and toys all are slathered in the brown goo. It’s almost like he set off a poop grenade and shrapnel decimated the “kill zone”.

Taking a deep breath you take the offender by the hand to give him a bath. You have to start somewhere, right?

As you undress the tiny artist, he looks up at you with his sweet eyes. His lip puckers out as you say, “Why would you play in your poop? Don’t you know how gross that is? Don’t do it again!”

His two year old mind doesn’t get it. Poop is fun. It’s soft and warm and brown. What’s not to love? Why wouldn’t you want to decorate your bedroom in poop?

Thankfully for Leo, he had an older sister who essentially “broke me in” many years ago. Bella loved poop too. She would often paint the walls of the very same bedroom with poop. When I would find her in the morning time, covered in her own artwork, she would just smile at me with a grin that said, “Look! Look at what I have created! Isn’t it magnificent?”

Except, it wasn’t magnificent. It was just gross.

This time when I encountered the biohazard disaster area, I didn’t yell at Leo. I simply told him that he can’t play in poop, I delegated some chores to help clean up the excriment, and then I laughed. What else could I do? He’s only 2. It’s frustrating, but he doesn’t understand.

Motherhood is messy. It’s frustrating. It can be overwhelming. There are parts of it that we wish we didn’t have to do. But the fact of the matter is, these instances are such a small part of motherhood. The time we have with our children is fleeting. I know- I only have to look at Bella and see that while she was once a Poopcasso herself, now she is a beautiful 12 year old who would be mortified at the thought of even touching poop!

If we are to get through these stages of life we have to do so with a smile and the knowledge that no station in life lasts forever. One day we will wake up to boys who no longer want to drink out of the toilet or paint with poop on the walls. But those same boys won’t want to climb into my lap and stroke my face as they fall asleep. They won’t have mispronunciations that make all of us grin from ear to ear and say, “Did you hear what he said?” And they won’t think that Mama and Daddy are the greatest things since sliced bread.

Yes, it’s comforting to know that these frustrating days don’t last forever, but it also makes me a little sad too. I can’t imagine a day when I no longer yell because they have lost yet another tube of toothpaste or have to wipe fingerprints off the windows and the t.v., but I know those days are coming.

I am enjoying my kids at every stage of their childhoods. I don’t want to miss a moment of it. It goes so quick.  I reminded myself of this over and over again as I dug out the poop from under Leo’s nails. It helped.

Now, when is bedtime again?

*I did not take pictures of this poopastrophe so this post is pretty devoid of pictures. You can thank me later!

One thought on “Encounters with a Poopcasso”