My Monday started by one of the girls saying, “Mama, I think you better come here and see this. Leo needs your help.”  Those are never words that should go together… especially on a Monday morning.

I found him in the kitchen sitting on the bench at the table in his little Superman underwear. Tears streaked his face. Around his ankle was a handcuff squeezing tightly. Caroline had put oil on his leg as well trying to loosen it, but still the handcuff sat snuggly against his skin refusing to budge. 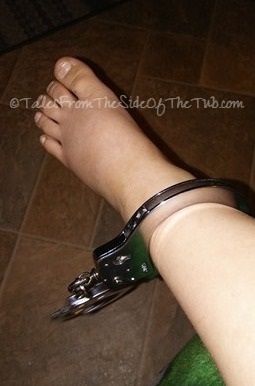 I sighed. It was definitely not how I wanted to start my Monday morning. I told him to wait; I needed to see if I could find a handcuff key since none of the kids who were up seemed to know where one was. I finally found a play key and slipped it into the lock. Nothing happened. I dug all the junk out of the lock that Leo had pushed in there, nothing.

These handcuffs were not simple play handcuffs. They had a look and feel to them as if they were real ones. Made of heavy metal and not plastic, the little key I had simply slipped into the hole and did nothing in return. I wiggled and maneuvered and tried my hardest to get it to work. Still nothing happened.

Frustrated, I went into my room to search for a real handcuff key. I had no idea where Mike might keep one but I still I searched. I couldn’t find one. I grabbed my phone and reluctantly called Mike. He was in a class an hour and a half away and I knew he didn’t need to be bothered with something so silly. But still, I couldn’t find a handcuff key and the handcuffs were really beginning to hurt Leo’s ankle. I was out of options- I had to call Mike. 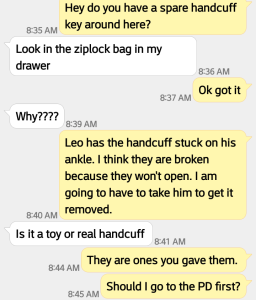 Mike responded quickly telling me where to find the key. I breathed a sigh of relief. Surely now we could get them off. I slide the key confidently into the hole knowing that this was going to work. But the key wouldn’t work. It was not the right kind.

In the meantime Mike slipped out of class to call me. He asked me to take a picture so he would know what we were working with. Sending a couple of pictures to him, he thought maybe I could take some needle-nosed pliers to the handcuffs to pry them apart. Full of hope that this would work, I got the pliers. As I worked Leo sat quietly, flinching at times when the cuffs pinched even more. I couldn’t get the right grip and pull on them to get them apart. Mike suggested that we take a trip down to the fire station to have them cut the handcuffs off.

We got dressed. I had to laugh at the shirt the girls put on Leo- a Saint Leo University shirt. I knew it was a misrepresentation of this boy- he’s no saint. The shenanigans he pulls and the trouble he finds himself in is exhausting at times he but definitely keeps me (and all my friends on Facebook) laughing and entertained.

The handcuff was cinched so tightly around his ankle that he couldn’t walk. I had to carry him. While he’s the baby of the family he rarely is ever carried. He’s four, almost five, and hasn’t been toted around in a long, long time. This boy is stout. He’s built just like Mike. I hefted him up on my hip and I tried my best not to trip down the stairs. Lord knows we didn’t need to have to go to the emergency room for the two of us falling down the stairs! Could you even imagine winding up there, broken bones, sprains, or whatever plus a handcuff stuck around Leo’s ankle?

Thankfully I had the agility of mountain goat this morning and I maneuvered the stairs with grace and ease (ok, really I was huffing and puffing carrying that great big boy all the while shoving his head into my shoulders so I could peer over him and tapping noisily with my toes to find the edges of the steps so that I wouldn’t be as “graceful” as I normally am). Success! We didn’t fall down the stairs and we made it to the car. I got him buckled in.

The Carroll County Fire Rescue Station is only about a mile from my house so it was a short drive there. I unloaded Leo and filled my arms with his bulky little body and we walked into the station. I peered through the window and knocked on the door leading to the room where the firemen sat waiting for an emergency. I smiled at them when they looked up and they came to the door to see what I needed.

I pointed to Leo who was sitting in a chair in the lobby and said, “Well, I have a boy who has his ankle stuck in some handcuffs and I was hoping y’all would be able to help us out today.” The fireman laughed and said he thought they would be able to help free the boy. He went off to get some tools and returned with a bag and of course his huge bolt cutters.  Leo’s eyes got big and the fireman assured him that he wouldn’t be hurt if he needed to use those cutters. He knelt at Leo’s feet and gingerly started to work to release him from his shackles. It took a little finessing, but he was able to finally pry the handcuffs apart and free Leo’s ankle. 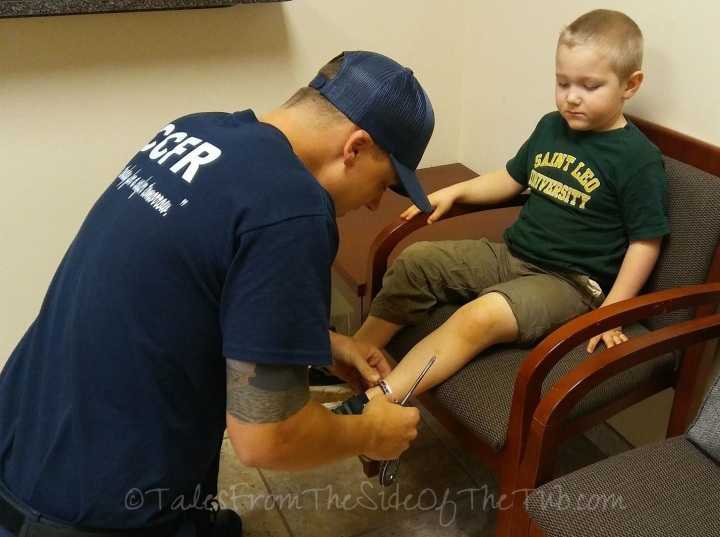 We laughed and thanked him for his help. I told him that I hoped this was his easiest emergency he had to deal with today. He said he hoped it was his only emergency he had to deal with. I agreed with him. He had the unbroken part of the handcuffs in his hand. He offered them to Leo saying, “Here you go. You can have these ones to play with anyway.” I laughed and took them instead and said, “Yeah, I’m thinking he’s not going to get to play with those!” The fireman agreed that maybe Leo didn’t need them after all. Leo politely thanked him and then we headed on our way home.

Holding Leo’s hand, who now could walk on his own, we got back in the van. Leo, now full of energy, asked, “So, what are we going to do today?” I could only laugh.

It would have been easy to get upset with the way our Monday was starting out. I knew ahead of time that today is going to be very hard anyway with some of the hurdles we know are in our way and the crosses that I know God is going to ask me to carry beginning today (but that is for another post). But I decided today that this little hiccup was not going to put me in a bad mood. Sure it was frustrating and I didn’t really have the extra time today to waste on trying to get this handcuff off Leo’s foot, but it’s what happened. I knew my attitude towards it would shape the whole day… but not just my day; it would shape everyone’s day. So today I am choosing to find joy even when I am frustrated. I am choosing to be happy when I want to be angry. I am not allowing Monday to get the best of me- to arrest me and keep me bound up in a bad attitude. I’m choosing to make the most of this day regardless of the bumps in the road, the hurdles I have to jump over, or the crosses that God asks me to bear.

Oh, and I am praying that these are the only handcuffs that Leo ever finds himself stuck in.