The Wreck and the Heroes

On Tuesday, I was a witness to a horrific wreck. An elderly couple hit a young man who was traveling probably over 70 miles an hour. His car rolled about 5 times before coming to a stop. I pulled over, gave my phone to my girls to call 911, and then I ran as fast as I could across the highway to the car that, thankfully, stopped upright. I was the first person on the scene to help this young man. As I got to his car it was obvious that he had massive head injuries. Blood poured down his face like a fountain. I searched for something to help put pressure to slow the bleeding, found a blanket, and gently told him to hold it to his head. Another woman pulled up and was beside me talking to him too. Soon a few others were there. They noticed oil leaking from his car and urged us to move back as his car could catch fire. We stayed beside him. How could we abandon him?

I sent others to look for his cell phone in the wreckage that was spewed across the highway. They found it and thankfully it still worked. The young man was aware enough to be able to tell us his pass code and the other woman made a phone call for him. As she stepped away to talk to the young woman, I stayed with the man. I tried to keep him awake and tried to soothe his fears. We talked about many things. I asked him if he was the praying sort. He told me he wasn’t. I asked him if it was ok if I prayed. He looked at me, eyes very far way and filled with fear, and asked, “Is it that bad?” I smiled as sweetly as I could and then assured him that help was on the way but that sometimes it’s just comforting to pray while you wait. I told him that I could do the praying. He thought it would be ok and so I stroked his arm, fought back tears, and asked the Holy Spirit to guide my words- and then we prayed.

It wouldn’t be long before we were surrounded with police officers from multiple agencies, firemen, and of course the ambulance. I backed away and they sprang into action working to free him from his car. As I stood on the side of the road watching them work, one of the firemen collapsed. Immediately others began working on him… he had stopped breathing. Divided, they worked on both individuals- the man stuck in the car and the hero on the ground. It was frightening to see them try to breathe life into the fireman who continued to lay still- no breath, no movement, no life. I can’t tell you how long I stood there watching the emergency workers tend to two different emergencies, but it seemed like an eternity. I prayed the whole time.

The young man was extracted from the vehicle after his door was finally cut off. They lay him on a stretcher and moved to put him in an ambulance. He was still able to communicate. For the first time I was able to completely see the wound to his head. Tears filled my eyes and I gasped. I prayed that he would survive.

The fireman, who had been laying in the median with emergency workers taking turns to do chest compressions, was loaded on a second ambulance. He still was not breathing on his own. I can’t even remember the ambulances taking off. I just stood, hoping beyond all hope and praying with such intensity that God would allow both of them to survive.

I was approached by a police officer who asked if I witnessed the wreck. I told him I had and that I was the first person on the scene. I relayed to him what I had witnessed and what I did to try to help. He asked me to write a statement. He encouraged me to be as thorough as possible… it was the only time I felt a little levity because, as a writer, I am always thorough, there was no way he’d get anything less than a novel. I gathered myself and tried to steady my nerves enough to write the witness report. It took me a while I as searched my weary thoughts and sifted through what I had just seen. When I felt it was complete, I signed my name and gave the report back to the officer. He thanked me and told me I could leave.

I had to cross the highway and then walk a little distance to get back to the vehicle I was driving. My girls sat inside, worried and scared. They had been watching from a distance. I drew my breath and started the truck. We pulled out into traffic and headed the short 5 miles home.

Later when I was alone I was able to let down my guard and cry. I cried for the man who was so seriously injured. I cried for the elderly couple, who, while they were not injured and their truck just lost a bumper, had felt the weight of what had just happened and I have no doubt the guilt was all-consuming for them. I cried for the fireman who had suffered a heart attack and now is in the ICU fighting for his life. I cried for his family. I cried for his coworkers who fought to save his life. And then I cried for all our emergency heroes because they have been demonized and vilified and yet most people don’t understand what they do and what they experience every single day. 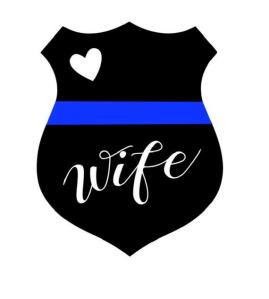 I have the unique perspective of being a police officer’s wife and so I know the sacrifices that they make… at least I thought I did. I know the long, hard hours. I know some of the stories; I know my husband shields me from the worst of the worst. I know the missed dinners, birthdays, and holidays. I know the constant hyper-vigilance when we go anywhere… always ready to protect and serve; always watching and waiting while others relax. I know not ever getting really close to others because they don’t understand the weight of being an officer or his family. I know what it’s like to fear for your family’s safety. I know the call-outs in the middle of the night and what it is like to be left behind as they speed into danger and we have no idea where they are or if they are safe. I know the after effects of a day of dealing with criminals, hate, and death. But being there as the first person on scene, comforting a severely injured person, wondering if this man will live or die but helping nonetheless, waiting for help to arrive and seeing one of their own fall while performing a heroic task, and finally watching as they worked to save both lives, well, that gave me a perspective that I didn’t have before… that I couldn’t have before because I am not on the front line, fighting the hard fight.

As the media (both the television and the internet) stokes the hatred that many in our nation have towards our emergency workers, in particular our police officers, I wish those who have such hatred in their hearts could truly see what these courageous men and women actually do for their communities. “Defund the police!” they yell. “ACAB!” they scream. “F*#@ the police!” they shriek. They think that all police officers are dirty; that they are racist criminals who set out each day to hurt or kill others, particularly those of color.  They have no idea, nor do they wish to understand, what police officers see and face each and every day. They don’t care that they are the ones who run into danger while all others are fleeing. They forget about the heroic actions they do where they risk their lives to save ours. They don’t see the people they help (regardless of color)- the woman who is lost, the teen with a flat tire, the man in a car wreck whose head has been scalped, the baby who is lifeless because he was choking and has stopped breathing, the family whose house has just been burglarized, the teens who have overdosed on drugs at a party, the woman who was raped, the man who was stabbed, the elderly woman who was mugged, the domestic disputes they help to end, the parents whose child is missing… the list goes on and on. Instead, they see the few cases where a police officer has acted criminally and they decide that all police officers are bad.

I wish others would care about the true sacrifices these men and women make for all of us. I wish they would quit buying the narrative that all cops are bad and that every police officer wants to hurt them. It’s disingenuous and demeaning… and quite frankly, it’s criminal in itself to push that narrative. Look at the real facts. Talk to a real police officer. Open your eyes and see them for what they are truly worth and what they truly do.

Those of us who have never been on the front line can never understand what our men and women in blue do for us. While I can understand some of it as a police officer’s wife, I still can’t comprehend all our police, firemen, and emergency workers go through. I had a peek at it on Tuesday, but I know that even that was just the tip of the iceberg. These men and women vest up day in and day out to protect and serve us. Why can’t we see them for the heroes they truly are?

Changing Your Life and Understanding

I imagine that most of us will never know or understand, however, if you truly believe that cops are the bad guys and that things need to change, I encourage you to first ride along (perhaps even join the force) to see what officers actually go through and experience. See the drama firsthand, witness the hate they endure, see the lives they change for the better, and become knowledgeable about what they actually do every single day.

While I readily admit that there is always room for change or improvement and that there are police officers who are criminals who need justice served to them, I would also say that there is probably far more change that needs to happen in our homes and in our communities as a whole. That change doesn’t start with police officers… it starts with US- you and me. We need to teach respect and kindness. We need to model respect and kindness. We need to hold our families, including ourselves, to a higher standard. We need to make it so that there is less need for police officers… we do this by taking back our families and teaching core values once again. Quit blaming the police for the violence out there and instead work at home, within our families, to teach that violence is not the answer… teach kindness, peace, civility, respect, and love. It is the only way we will overcome this plague of hate that has enveloped the hearts of so many.

Finally… Thank you to all of our emergency workers. Thank you for your quiet sacrifices you make each and every day. Thank you for continuing to care and to do your job even when the world hates you. I see you and I appreciate you. I have your six and I will always back you.